By CanoeKayak.com. | The Australian paracanoeist amasses victories as kayaking provides therapy from a devastating life-altering accident five years ago.

Each and every day he inspires the lives that he touches – his paddling leaving observers amazed, while serving as a personal means for recovery and healing.

Curtis McGrath paddled to a fifth career world title at the ICF Paracanoe World Championships on August 23, exactly five years to the day after losing both his legs while on a mission for the Australian Army in Afghanistan.

"To get to do something I love is really cool and that's because of that day," McGrath told C&K during an exclusive interview at the championships. "It's not a day I'll forget, definitely one I'll keep in my mind, but also not so significantly in a way."

The 29-year-old Aussie paddled 200 meters in 41.758 seconds to win the KL2 class – for competitors with proficient use of the trunk and arms, but limited or no use of their legs – at the championships in Račice, Czech Republic. It is the same class and event that McGrath also took home gold at during last summer's Paralympics in Rio de Janeiro.

Throughout his healing and recovery process, McGrath has shown tremendous fortitude and perseverance overcoming unimaginable adversity to prosper in sport and life.

McGrath said he owes much of it to paddling.

"It's given me a purpose – to focus on something really positive," said the Australian kayaker. "Regardless if I came first or 20th, I think it was important to first be healthy and active, and secondly to get out and do something I really enjoy and get the endorphins flowing.

"Each day when you're out on the water and the sun is coming up,” he added, “There is something really enjoyable and precious about that moment when it's just you and your kayak."

McGrath added a second title in the VL2 classification two days later in Račice, powering a Va'a outrigger canoe to victory across the same distance.

Paracanoe debuted at the Paralympics last summer in Rio with medals awarded to men and women across three classifications. McGrath became one of six of the first-ever Paralymic gold medalists in the newly added sport.

"The sport of canoeing and kayaking is a very accessible sport for wheelchairs users and lower-limb amputees," McGrath noted. "Sometimes upper-limb amputees have a prosthetic that allows them to paddle as well.

"It's a very inclusive sport,” he added. “And that's what is great about it being in the Paralympics now."

His Paralympic triumph added another notch onto a long belt of accolades, including the 2016 World Paddle Awards which named McGrath its Sportsman of the Year. He was the first Paralympian to receive the honor.

McGrath carried by his fellow soldiers to the medivac helicopter following the incident on August 23, 2012. Image courtesy of Curtis McGrath

In an instant, his life was forever changed.

On a late morning on August 23, 2012, McGrath stepped on a landmine during a collaborative mission with the Afghan National Army in the Taliban-infested hills of the war-torn country. In agony and pain, fighting for his life, it immediately became evident that he would never walk on his limbs again.

"I don't remember flying through the air, the blast, or anything like that," McGrath recollected. "I remember opening my eyes, laying on my back and looking up at the sky. It was sort of dark and dusty with rocks falling down.

"I get up on my elbows and looked down and then I see that my legs are missing. Gone," he said. "That's when the pain hit me: It felt like I was hit by a freight train."

McGrath, who was the first-aid leader of his combat team, miraculously talked his fellow soldiers through the process of setting up IV fluids, administering morphine and recording details.

"The boys were exceptional – they did everything right and I think that's the reason I survived," he said.

In the midst of the horrific incident, McGrath, an avid sportsman, uttered to his mates – who were frantically carrying him to a medevac helicopter – that he was going to compete in the Paralympics.

"I said 'You guys will see me in the Paralympics,’ McGrath recalled, “And that was a little seed planted and thankfully enough of the stars aligned."

While competitive kayaking has provided McGrath a new lease on life, it was a recreational trip with friends in Australia, just one year after the traumatic accident, which began to ease the mental and physical wounds.

"We paddled 40 or 50k, sometimes 60k each day and then pulled into a beach camping and do it again the next day," McGrath said.

"It was really great to be around similar-minded guys, all from military, and all being part of that experience to overcome the daunting task of paddling all that way."

An Inspiration For All

McGrath aims to defend his title at the Tokyo 2020 Paralympics, as he and his miraculous story continue to inspire others.

Fellow Australian world championship gold medalist Susan Seipel – who was born with her disability – said McGrath is a fantastic teammate.

"He's achieved so much in this sport in a short time and he's really inspired all of us," Seipel said. "How he has made such an easy transition from being an able-bodied person to being a disabled person is incredible." 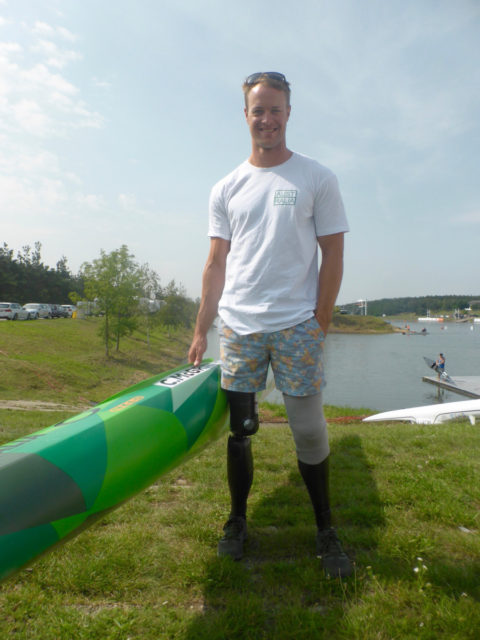 McGrath during a rest day in the Czech Republic. Image Brian Pinelli

McGrath credits his family and girlfriend of six years, Rachel, who he says have been there for him helping in his "best days and dark days." It is evident from his words and actions that time spent paddling on the water is where McGrath is most at peace. His positive attitude and will to endure in the wake of personal tragedy is something that anyone can learn from. As McGrath put it:

"It makes you realize that with the opportunities you are given, you need to make the most of them."