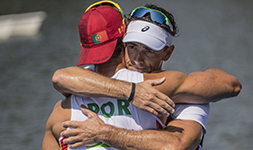 After failing to make final in his last Olympics, athletes pay tribute to kayaker who won four medals for Canada.

Adam van Koeverden of Oakville, Ont. failed to advance to the final after finishing 6th in the K-1 1,000-metres kayak race in Rio de Janeiro, Brazil during the 2016 Olympic Summer Games. He was consoled with a warm embrace from Portuguese kayaker Fernando Pimenta who qualified for the final with the fastest time.

RIO DE JANEIRO—When it was over Adam van Koeverden pulled himself from the boat and he tried to smile, and an old friend from Portugal came to give him the kind of hug that shows you mean it. They first met in a race in the Czech Republic in which Fernando Pimenta refused to lead and then passed van Koeverden at the end, and the Canadian cursed him out by name, to which Fernando said angrily, “nobody except my mother calls me Fernando.” They have been friends ever since. Van Koeverden still calls him Fernando, even if nobody else does.

So Pimenta embraced the Canadian kayaker, who had just failed to qualify for the final in the men’s K-1000. They have known each other a long time, because van Koeverden has been doing this a long time, and this was the end.

“He knows that I’m probably done.”

It meant a lot to van Koeverden. It meant more than it used to. When the Toronto native arrived in Athens as a 22-year-old, he boldly proclaimed that he was there to win. In the context of the Canadian Olympic movement at the time, it counted as a brash statement of intent.

And then he did. He won his first two medals in Athens, bronze and gold; he won silver in Beijing, and again in London. He would go out fast, force the race, lead. He became a voice for Canada’s ambition, for sport, before Own The Podium came around.

“He’s inspired people in a lot of different sports other than canoe kayak,” says Scott Oldershaw, Canada’s national team head coach. “Not only the four medals, but his thoughts on life and his thoughts on competition. I think he was one of the first Canadian athletes to publicly say that showing up isn’t enough. In Athens he talked about that, that he wasn’t there to compete, he was there to win. He alluded a little bit that he was tired of Canadians, saying I just want to do my best. He started people thinking, I want to win medals, and that was a big thing.”

But by the time London was over, though, van Koeverden wasn’t sure he had anything left. At the post-world championships party last year he said goodbye to old friends — to his pals from Australia, from South Africa, from New Zealand, just in case, you know, he didn’t see them again. How far away was he, really, from coming back?

“I don’t know how to answer that,” said van Koeverden, pausing, thinking. “I told my coaches I was done.”

And then he decided, one more shot. He trained differently, at age 34. Before these Olympics he wrote cards to seven men he felt he needed to thank; to Oldershaw, whom he calls his wizard, he also enclosed a vintage stopwatch as a gift. In the days before this race van Koeverden felt like there wasn’t anything left that he needed to accomplish; just one more chance at a medal, and see what happens.

And then the semifinal started on a glorious hot sunny day in Rio, and the waves were rolling sideways, and van Koeverden stabbed his paddle into water that wasn’t there. He trailed from the start. He said it was no excuse; he tried to hit the gas and catch up, but only the top four advanced. He finished sixth.

“Four years ago,” said Oldershaw, “that (start) wouldn’t have made a difference.”

There is a B final Tuesday, and van Koeverden will race to see how fast he can go compared to the A final. But this is the end. There is some irony here: van Koeverden is the man who pioneered the hellacious start in kayak, and now everyone does it. And the start, as much as anything, is what sunk the last real race of his Olympic career.

“It means maybe I changed the sport a little bit,” he said. “Everyone’s going out f------ hard. You remember the last three Olympics? Not everyone used to do that. People would always say, ‘Why do you do that?’ Because it’s my way to win races, because that’s the way I try to win races. I grew up watching Steve Prefontaine in those movies, and he’s my idol. I used to run the 1,500 and the 5K on the track, and I wanted to win. I showed it. I wasn’t going to hide behind people. And now look at it. Everyone went out hard. I’m not taking responsibility for the races, I’m not taking ownership of it, but Fernando came down and he said, ‘You’re my example.’ ”

“I’m so happy I did this year for me. It was hard, and I had to change how I paddled again to make it feel good again. This is a sport that’s all about your touch. It’s not just about how hard you can crack. Like, we’re not grinders. We’re technicians. When you’re doing it really, really well, it felt easy. My heat this morning felt f------ easy. I felt if I can just do that again . . .

“But you don’t get to write the last chapter of your book, sadly.”

But he was happy he came back, because he did it on his own terms. He didn’t do it because he felt obligated; he didn’t do it because it was his job. He did it to compete, to test himself, to finish the damn race. He watched Andre De Grasse win bronze Sunday night with the covers up, just before bed. He will likely continue with the CBC and with the Canadian Olympic Committee, if they’ll have him. The country means a lot to him.

“Getting to watch our women kick serious ass, watching Andre De Grasse yesterday — I’ve never been prouder to be Canadian,” said van Koeverden. “I know this is a big departure from who I was in 2004. But for me, sports is about a lot more than (winning). Maybe the thing that I’m taking away from my entire career is that I’ve learned a hell of a lot.”

He was a fierce advocate for winning to start, and grew into a man who appreciated something bigger. 2012 was the goodbye Games for a generation of our finest Olympians, from Clara Hughes to Alexandre Despatie to Emilie Heymans to Simon Whitfield. Whitfield had built himself up for one last shot, and then in a flash he crashed on the bike portion of his last Olympic triathlon, and a great career was over, bleeding on the pavement. It broke van Koeverden’s heart, and before his own race the kayaker wrote Whitfield’s name on his with his fingers on the wet dock, like writing on a window in the rain. He wanted to race for his friend and honour his career, and his end. He wanted to race inspired.

Well, this was Adam van Koeverden’s end. Four Olympics, four medals, a man of achievement, and one of our finest Olympians. He spoke for achievement before it was popular, and tried to honour that to the finish. He was our example, too.