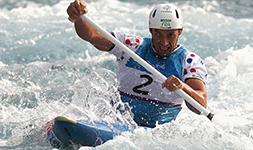 Gargaud Chanut smoothly negotiated the 24 gates along the churning 242m whitewater course to finish 0.85 seconds ahead of Slovakia's Matej Benus. Meanwhile, Japan's Takuya Haneda became the first Asian athlete to win an Olympic medal in canoe slalom as he finished third, a full 3.27 seconds slower than the flying Frenchman.

Gargaud Chanut, 29, continued the proud C1 slalom tradition established by his compatriot Tony Estanguet, who won the event no less than three times and is the only French athlete in any sport to win gold at three separate editions of the Olympic Games.

The Marseille native looked comfortable throughout, producing a fault free descent in the final, with only his Slovakian rival coming close to knocking him off top spot.

“I love being under pressure. That suits my personality as an athlete,” said the triumphant Gargaud Chanut. “There was one moment where I said to myself that I was performing better than everyone else today, but I wavered two or three times, and that gave me a quick wake up call.

“My strategy was to play it safe at the top of the run, so I could give myself the chance to produce a quick time at the bottom, and that’s what I managed to do. At the bottom of the run I was on fire!”

Victory in Rio will be a massive boost for Gargaud Chanut, whose ability to compete at the highest level was questioned by some following his failure to qualify for London 2012.

Fittingly it was Estanguet, now a Member of the IOC, who was on hand to present his compatriot and successor with his gold medal.

“Winning any medal would already have been massive. So it’s great to taking over from Tony as champion! It’s incredible!” added Gargaud Chanut.

The canoeist’s gold continued a marvellous day for France, following hot on the heels of their gold in the equestrian team eventing