Double gold for Birkett in Portugal 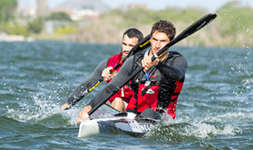 Andy Birkett won the gold medal in the men's K1 ICF Marathon World Cup in Prado Vila Verde in Portugal, repeating his short course victory on Saturday to make it a double gold weekend for the Pietermaritzburg paddler.

Adam was a casualty of the raised intensity midway through the race, and with the podium decided the lead trio settled into a classic game of cat-and-mouse in the final quarter of the race.

Going into the final half lap Boros was uncharacteristically sluggish on the final portage, allowing Ramalho and Birkett to get away.

Boros fought back gallantly but then got stuck behind an under-23 back marker exiting the final turn, leaving Birkett and Ramalho to fight it out for the title in front of a vocal crowd of supporters.

Birkett took a brave tactical gamble to cut behind and inside of Ramalho with a hundred metres to go, a gamble that hinged on him starting his end sprint some way further from the finish than he would normally have liked.

The Euro Steel paddler had plenty of gas in the tank and powered across the line to claim his first senior international marathon title.

"I am thrilled with this win," said Birkett, quickly pointing out that his strategy in the build-up to the World Marathon Championships was built on getting as much racing experience under his belt as possible.

"I didn't have a good race at the World Marathon Champs last year so this is all valuable experience for me," he said.

"My plan initially was just to stay with the fast guys. Once we had settled into the group of four we were able to relax. Before in the big group things were a bit chaotic," he added.

Birkett will return to South Africa to fine tune his preparation for the World Marathon Championships in Brandenberg. Germany in five weeks’ time.