Lisa Carrington has her eyes on a golden Olympic run and won't be letting one loss hold her back.

Carrington was edged by reigning Olympic champion Danuta Kozák of Hungary in the K1 500 metre final in the first canoe sprint World Cup in Duisburg, Germany, a fortnight ago.

However, she wasn't going to let that disrupt her Rio Olympics plan as she headed into the World Cup of the season in Portugal this weekend. 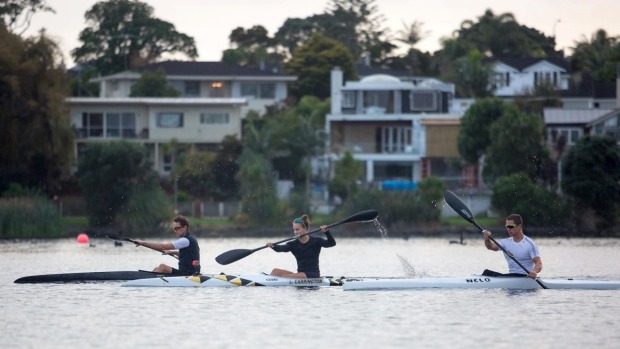 Carrington was targeting a K1 200m and 500m double in Rio de Janeiro later this year and was shown just how challenging that would be in Germany.

For the past two weeks, Carrington and fellow Olympian Marty McDowell have been training in Munich with coach Gordon Walker, skipping the second World Cup in the Czech Republic to focus on the third round which starts on Friday (NZ time).

Walker said he was happy with the progress over the last month and wouldn't be changing anything in a hurry.

"We've got a training block planned between now and Rio and whatever happens at these World Cups won't change that.

"We always knew that Danuta would be back - as you see in a number of events, the cream starts to rise to the top in the very last part of the four-year cycle and the intensity gets really high for those medals.

"This week is really about trying to evolve our plan and improve on those little things we picked up in World Cup one and then take those into World Cup three."
Ad Feedback

Though Carrington had dominated the shorter distance, having now won 12 consecutive major title over 200m including the 2012 Olympics, Kozák's reemergence was the talking point in the 500m.

The 29-year-old couldn't make the Hungarian team last year, with rising star Anna Kárász, who was second to Carrington at the world championships preferred.

However Kozák stormed back this season, beating the Kiwi by 1.125 seconds in Duisburg, with 2008 Olympic champion Inna Osipenko-Rodomska of Azerbaijan third just 0.072sec further back.

With just over two months until the Olympics start, Walker was aware of the need for patience as he prepared his star charge, determined to use the World Cups as a chance to test and refine rather than make wholesale changes.

"There's a long way to go between now and Rio. It's really about being in the best shape you can, once per year, and what it's going to take to do that is probably our biggest consideration.

"Testing ourselves at these World Cups is helpful to a degree but it's more important that internally we know what we're doing and we're confident we know where we're going on a day-to-day basis."

McDowell will open proceedings this week with his K1 1000m heats on Friday night (NZ time), having battled illness since arriving in Europe a month ago.

Walker's first consideration for the Wellingtonian is just to get him racing healthy.

"He was a little unwell before World Cup one and since then, he's had to back off quite considerably. We're just taking things day-by-day and hopefully if he comes right, he'll be able to get a good start at World Cup three and start building some confidence."

Carrington's 200m heats will follow, with semifinals for both events later in the day.