The sportsman the professional from Canada, the World champion and the Olympic Champion has agreed to answer our questions. We suggest to visit Adam's official site: Vankayak - Adam van Koverden

Adam tell, how you have got to flatwater kayak? Than was engaged to it?

My town, Oakville, Ontario has a successful but small club called the Burloak Canoe Club, formerly the Oakville Racing Canoe Club. Larry Cain, Olympic Champion 1984 C1 500m is also from Oakville, so the club has some popularity in the community. I wasn't an athlete, but in September 1995 my mother saw an advertisement in the local newspaper: "Future Champions Wanted: Burloak Canoe Club". So we went to check it out, and I went back everyday since.

Currently in Melbourne, Florida. I still train in Oakville on the 16mile creek when I'm home, and also in Toronto on the shores of Lake Ontario.

What your strongest result in sports?

I am 55 time Canadian Champion, 22 time World Cup Champion, and 1 time World, and 1 time Olympic Champion. I was named Canadian Athlete of the Year in 2004, the same award given to athletes like Wayne Gretzky (ice hockey), Steve Nash (basketball) and Mike Weir (Golf). These achievements are the ones I am most proud of.

In what kinds of sports still was engaged except a kayak?

I was never very competitive in any sports until I found kayaking. As a kid I played baseball and soccer. In school I ran track and field and Cross Country. I am a pretty good cross country skier, and I enjoy snowboarding.

Who your First trainer? 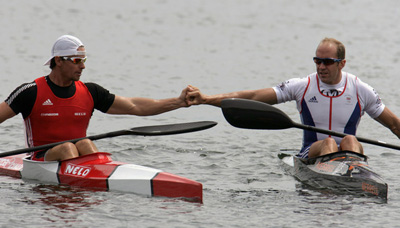 Tell about the most remembered race...

So many to choose from! The World Championships in 2007 were very good for me. Such a close race in the 1000m with Tim Brabants, only to be 2nd, and my 500m race was almost perfect. I really enjoy racing in Duisburg.

You remember the first victory?

The first race I won was the first race I did! I raced on a small lake at a Canoe Club regatta in Richmond Hill, Ontario. K1 500m when I was 14 years old, I won it, but there were many more later that I lost! 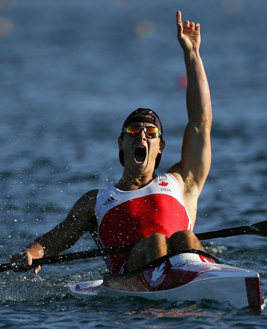 What most of all you love in flatwater canoe kayak?

Paddling a kayak is close to nature, I love this, I love being outdoors and having a close connection to nature.

What your favourite training? For example in a hall, on water, power, circular, cross-country...

Being on the water is my favourite, I also really enjoy cross country running and skiing. I think my favourite on the water is intervals, because it's where I am the strongest. 10 x 4minutes with 2 minutes between, or something like that. When I run or ski it's usually just steady, 40min or an hour.

On yours, the Russian national team the strong contender?

The best Russian I compete against? Anton Ryahov. He's usually very fast, especially in the 200 and 500, but lately he's been really good on the 1000m as well.

Tell about Olympic games Where it was pleasant it is more, what has remembered?

Athens was a totally positive, incredible experience for me. Beijing had some disappointment, but also a lot of positives. I value and cherish my silver from Beijing, Ken Wallace was very strong and deserved to win very much. I learned to value my failures as much as my victories, as learning opportunities. Without failure it's impossible to recognize the true beauty of success.

Whether you are able to row on a canoe?

I can paddle a canoe, but not very fast! It's called a Canadian, so I must be able to at least balance and go forward in a straight line...

That could you wish young sportsmen?

To enjoy sport and competition, to follow the rules and compete for the right reasons, fairly without temptation towards doping. To use sport as a tool to become a well rounded and full individual. To be a good role model and example for the younger generations. Remember to thank your parents and coaches for all their support and help!

Adam thank you very much for your candid and good interview! We are very pleased your wishes, and so it was interesting to know the answers to the questions we have accumulated. We hope not the last time. :))) Good luck to you and only smooth water!